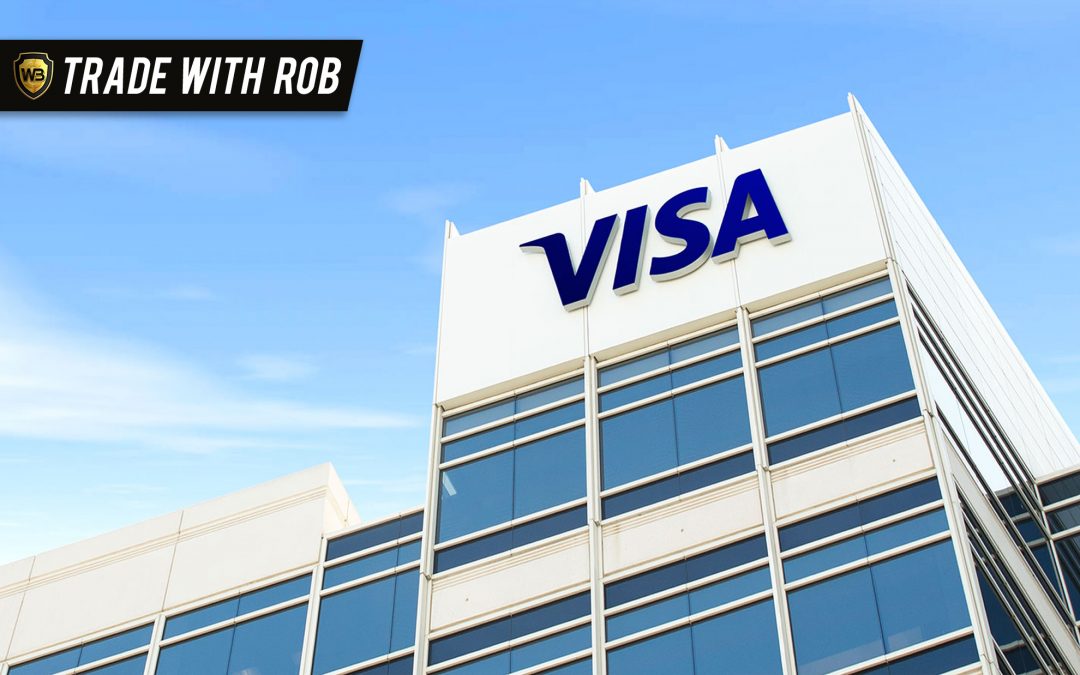 Welcome everyone, Robert Roy from WealthBuildersHQ.com. Welcome to this edition of Trade With Rob which is for July 7th, 2021, that is Wednesday. Now markets just closed up not even 5 minutes ago, so let’s go ahead and take a look at the market and see what’s happening there first.

So the S&P 500 – if you follow along for the day, what did it do? Well, we had a quick move up out of the box, and KERPLUNK. Great bearish entry there, another one there. We got a little too deep into lunch time around here when it rolled over, and then what? We had a moving average cross, we had a nice opportunity here, another one here, and too late in the day to take anything there. Overall, recovery in the S&P from where we were (down below the 4320 level), we still finished about nine points to the downside. We had a big overall move to the downside earlier in the market, and recovered after lunch today.

So, let’s go take a look at our candidate for today, and our candidate is V, which is Visa. Let’s talk first about the Fib setup. So there’s my V-bottom there, great thrusting move, small hiccup in the middle there, nothing crazy, and what a great V-top in there. From that point, what did we do? We pulled down to the 50 percentile which gave us an upside-down “h,” there’s our 2 standard deviation move before we trailed off. We continued – pushed up, pulled back, played around – went back to the .236 which means hesitation, and then what? We pushed up 3 days in a row where the wick popped itself above the 237.50 level and then pulled back. Then finally, finally, we got a close above, and today we got a retest and a bounce. I wish I had caught it earlier today – I did not.

So here’s what we’re looking for. On Visa, I am looking for this to take place: In an ideal world, I want to see a move down and a retest of the 237.50 level. It doesn’t have to come all the way back, but I definitely would like to see it make it down there closer. Now, you can wait for it to close there, you could take an intraday bounce – that’s your call how you chose to enter your trades – whether they are a quick retracement in and out, or a close and a bounce the next day. I like the latter. I like to see it close below, but that doesn’t always set me up, meaning that’s the only way I’ll take the trade. It really depends on what’s going on in the market and so forth.

We’re not trying to hit homeruns here; that’s not what this is about. None of these trades are designed to be homerun trades. If that’s what you’re looking for, this is not the place for it. I have other things where we hit homeruns, not here. Guys, I am trying to get you consistent, over and over and over again. In the last 12 trades, we’ve had 1 go against us. We have nothing open right now, we’re completely out – done on every one of them. All we’re trying to do here is help you on how to get started. And of course, before you ever put real money in, you should be doing non-funded trades to get yourself acclimated.