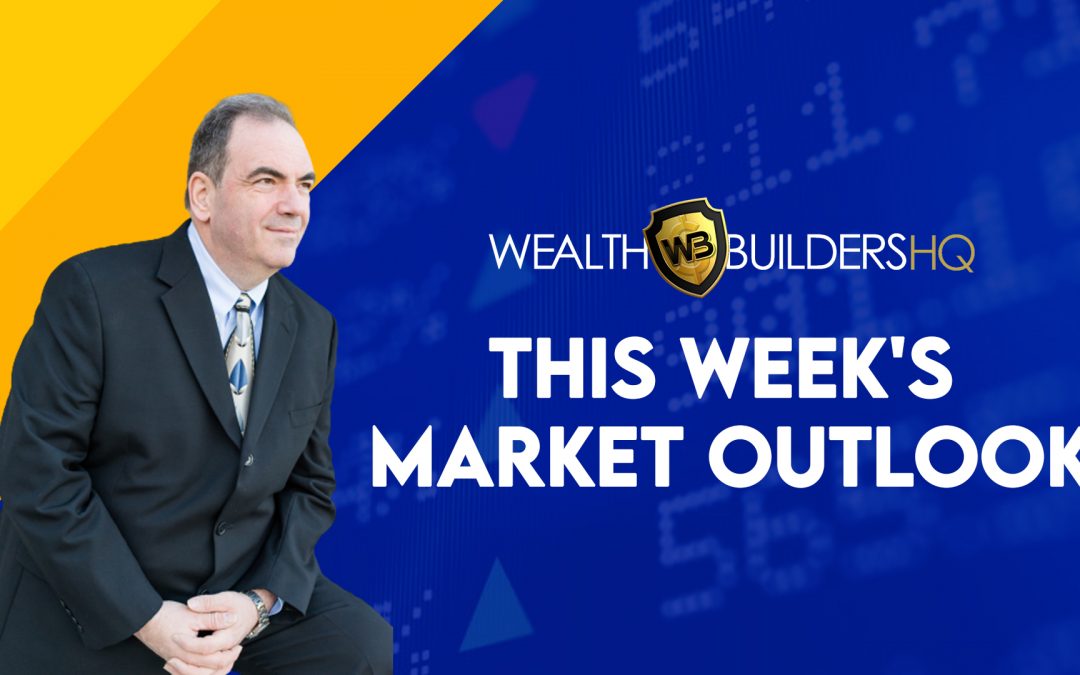 Welcome, ladies and gentlemen. This is Rob. Welcome to the Market Intelligence Report, brought to you by WealthBuildersHQ.com, and this update is for Monday, December 12th. Yes, the 12th, halfway through December 2022. Hope you had a great trading week, man. What a day it was. Today, we’re gonna jump in and look at the s and p in just a little bit. But as we do keep in mind that everything we look at is for educational purposes only. Nothing is meant to be advice or recommendations. So let’s start with the VIX first.

We had a small pop today in the VIX. It wasn’t crazy. It could have been a lot worse with the way the market had looked early on, right out of the gate today at 8:30. And one second when that report came out on PPI, we went crashing to the downside on the S&P, so we could have seen it a lot worse. Fear kicking in there, but not too bad we’re our VIX. It’s still in the green. We’re in kind of the middle zone of the green level. So it’s a, it’s a comfortable place to be, right? I like where it is. We’re sitting at 2285 right now. Really not bad. A week ago, we’re about 19, so very much on the lower scale of that green zone, but still in a really, really good place, right?

If we go ahead and bring up the S&P 500, let me take that down, right? So what do we have to do? You guys know the drill already. We need to back this up. It’s gotta hit the right dang buttons. We gotta back it up and look at the bigger picture of the overall pattern. See, we have been since November of last year in a bearish pattern, only recently have we had a bullish move. This whole thing in here was fake. It was not real. It was every other attempt we made, moving to the upside into resistance, slapping our head on ugly and falling back down again. We do it again and again and again. So why did traders believe that this one, this time is the one? They’re wrong. Ther’re wrong. Now, am I saying we’re not going back up from here? No, we’re going up sooner or later and traders are gonna be right sooner or later when they go, this is the one, and sooner or later you’ll be, I just don’t see us there yet, especially with all this news coming out between PPI, CPI on Monday, Wednesday, the Fed announcement. There’s a ton of stuff going on. If we look at the economic reports, guys, look at this. I mean, you got, look at the red. It’s a sea of red starting on Tuesday. Monday is a buy day. You got nothing happening there. CPI on Monday, FOMC, I mean on Tuesday, f OMC on Wednesday, retail sales on Thursday, PMI again on Friday. Now Thursday, Friday after the Fed announcement, two o’clock, 2:30 press conference, and the press conference, whatever is really looking for. There’s only right now and I, they may not have been done an update yet for today, but as of this morning, we were at 3/4 about 75% chance that we would see a one half-point increase. This morning, that means we were at a 25% chance to see a three quarter point height rate hike increase. I’m not sure where it goes yet. I really am reserving that until I see what happens with CPI on, on Tuesday. But we’re gonna see where that all goes. All right.

So if we look at the intra day move, and then we’re gonna come back and wrap up the, the full-time on the S&P. Look at the move at 8:30 this morning, right? If you look, let’s get a drawing tool in here. If you look at what the heck has gone on, we were flat on the open today, right? Today, Sunday, right? Or Thursday. Duh Thursday we were flat at 6:00 PM as we opened up, right? And we ran up. We had a nice run into the European market. We backed off a little bit. Great run there right into 8:30 and boom, shaka laka down, we ran back up, consumer confidence came right in about here. We had a nice increase and then we just fell apart at the end of the day. Maybe some profit taking going on there, right?

So now what? Well, we looked at the daily chart, right? You’ve remember, remember, remember, remember, you cannot focus just on a singular chart. If we take this over and look at a weekly chart, what does the weekly tell me? The weekly says it’s just as ugly as the daily was. Look at the pattern we closed up last week for the first time ever in this move above that downtrend line. And what happened this week, we got crushed 137 points to the downside on the s and p 500, not a purdy place to be, right? We’re looking at a monthly chart as well. What does the monthly tell us? We got close to the line last week and we fell off of it from there. And we’re back down today this month again, right? For the month of December, we’re down right now, 145 points on the S&P 500. So overall looking very ugly for the S&P, right? On top of that, when we look at the pattern we’re in right now, we’re setting up in a neutral bias. Go figure. Come Monday, we’re opening up into a neutral bias as the market gets going Monday morning, right? Which is really a position one in the chair, sitting back, hands behind head waiting for a decision to be made. What do you wanna be when you grow up, right? That’s what we’re trying to get this S&P to tell us, and it doesn’t know yet because of what’s happening Tuesday and Wednesday, right?

So we’re looking to see, can we get back above the 8 and 21 moving average, which is also above this purple line I’ve got drawn in there, or are we gonna violate the zero line and look for a breakout to the downside? Time’s going to tell, but watch those economic reports. They are critical. All right? With that ladies and gentlemen, make it a profitable day. Stay focused on the quest of becoming a great trader. Keep crushing it and remember, you’re just one trade away. Take care everybody. I will see you at the next update. Bye for now.